Home Learn From Our Designers The House is the Star

The House is the Star 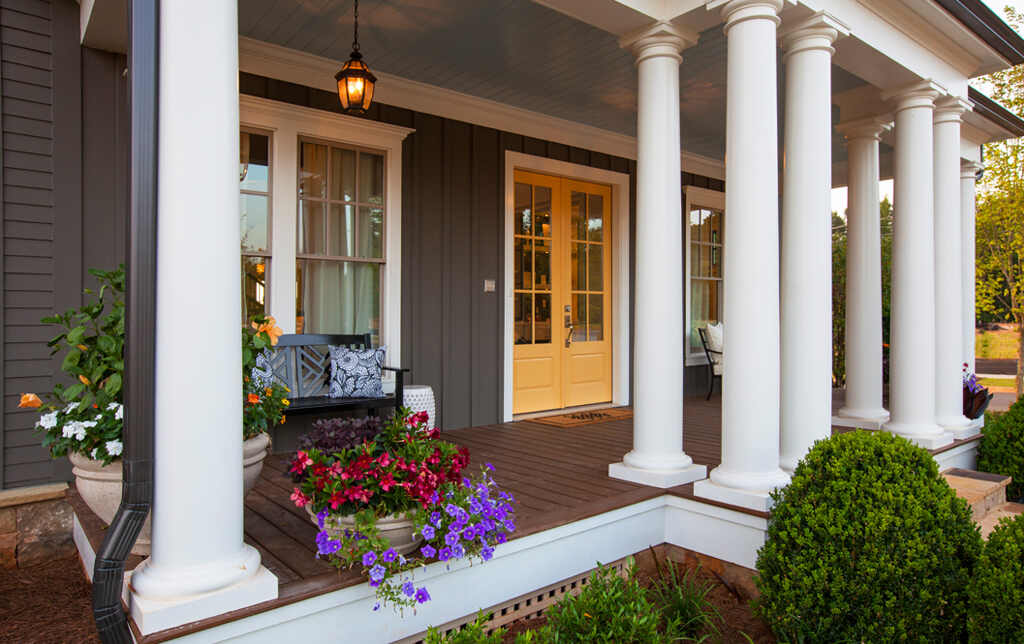 We’ve all fallen in love with a heartthrob on the big screen. It’s easy to get drawn into a movie or TV show and begin fantasizing. I cannot even begin to tell you how many times I have fallen in love watching a movie, and I must confess that one of my biggest movie crushes is the house from Something’s Gotta Give—which also starred Diane Keaton and Jack Nicholson.

Driving up to the house, you instantly know where you are. The house screams Hamptons, where the sun, salt water, and sand naturally age the cedar shingles beautifully. The crisp white trim pops the architectural details and the long slope of the roof bearing on the first floor plate gives the house a human scale, welcoming in all who approach it.

The living room is fantastic with a wall of French doors topped with transoms that wash the space with light and provide beautiful views of the outdoors. These mimic the glass entry of the foyer and the transoms that top the openings that spin off that space. An interior wall opening to the study and a secondary bedroom houses floor-to-ceiling bookshelves that are filled with enough books to read to occupy you through the summer and into winter, when the fireplace would warm the cold air. On an adjacent wall, there is a neat staircase that connects to the second floor, and makes me wonder if the film’s interiors were shot on a soundstage, as the stairs look a little steep. But the space is beautiful and cozy enough for everyday life as well as for entertaining. It’s similar to many of our designs where the Great Room has taken on more space as the living room fades into the past and many households use the space to house both living and dining.

The kitchen is a scene-stealer. It’s the kind of space that we can all imagine will make us better cooks. Anything made in a kitchen that beautiful just has to taste better. The large windows wash the room in light and the details foreshadowed trends in kitchens designed not only to work well but also look great. Although big, it’s inviting. There are enough wall cabinets for storage, but most of the base cabinets don’t have anything above them, allowing the space to feel even larger. The island is a single large surface big enough to park a car on. Again, you can see how this 2003 movie presaged the current designs of many of our houses that host a large island, or even two.

The master bedroom is another great space that gets a lot of attention in the movie. It is superbly appointed and terminates with a beautiful bayed window that serves as an office for the writer who lives there, including the requisite built-in bookcases on each return of the large, angled bay. But an office in the bedroom? In the movie it is used to reinforce that Diane Keaton’s character is emotionally shut down. But still, the inspiration that could be had looking out that window! The bedroom might be a little more Hollywood magic at work, though. It is beautifully scaled and furnished, but I think its apparent size has a lot to do with creatively negotiating the cameras through the space as the story unfolds. The bad news is that the real house with these fictitious interiors is beyond the reach of my dreams, as it sold in 2014 for a gigantic $41 million dollars. So you can understand if I’m a bit fickle, and there are several movie homes that catch my fancy. The house featured in Home Alone, located in Chicago, is incredible. And I will take anything from Under the Tuscan Sun, especially the house. The houses featured in Father of the Bride, The Notebook, and The Holiday all get best house honors from me as well.

All of these houses evoke a familiar thought or a feeling. They spark something in you that makes you smile. Many of them may remind you of your favorite place. The house from Marley and Me literally takes me home to my parents' house near Chadds Ford, Pennsylvania where some of that movie was filmed.

Then there is the house in The Truman Show. Talk about favorite places. Seaside, Florida is the idyllic setting for the movie. The magical house where Truman Burbank lives has multiple hues of sherbet colored trim and a trellis that looks as if it were built out of popsicle sticks. What makes the Truman house special to me? My wife and I vacationed at Seaside early in our relationship, with her parents and great family friends. We also honeymooned at Seaside and every year since have made multiple trips to the panhandle of Florida and the New Urbanist towns of Seaside, Rosemary Beach, and Alys Beach. Each visit has enlightened me and impacted what I do when I get back to the Ashton Woods office. And whenever I see the house from The Truman Show I just smile.