Home Learn From Our Designers Home Design Color Trends: Then and Now 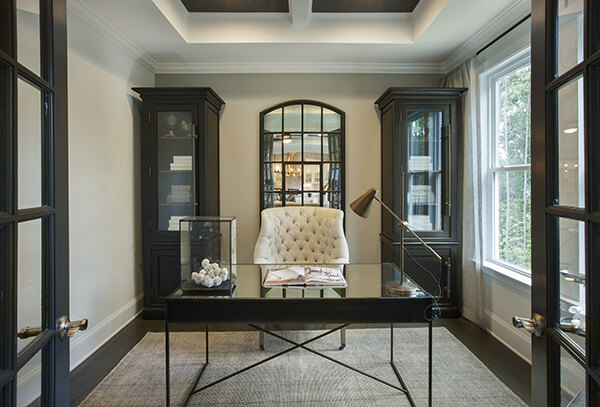 Major color trends are easily identified when looking back at past decades and looking back can also help us determine what might be next. Design, especially home design, reflects our feelings at the time: Americans felt very differently in 1950 than they do today and the design trends reflect that. So before we look into the crystal ball of colors for 2017, let’s explore some design and color history, beginning in the 50s.

Bright colors and pastels define post-war décor. Most Americans were feeling hopeful, embracing fun and vibrant colors. Think of the yellows, flamingo pink and even turquoise of appliances from that time. The slick black, white, red and chrome seen in a fifties-style diner represents the upbeat social life teens and families shared. “After World War II ended, many Americans were eager to have children because they were confident that the future held nothing but peace and prosperity.” (Source – History.com) Confident times brought visions of happy futures: Some Americans moved out of big cities, raising their growing families and building new homes in the suburbs. In the 1960s, the mood shifted from confidence to revolution. Many younger Americans fought for changes in social justice and equality, along with end of the Vietnam War. The generational divide between these young Americans and their parents caused big changes in society, which was reflected in color palettes. There was greater luxury and upscale style in décor, as well as groovy, bold, game-changing patterns and colors. Décor was energizing and provoking. Thus, we see the bright oranges, purples, pinks, bold yellows, and engaging patterns of the 60s.

Even though American society continued to divide over civil rights and politics, décor in the 1970s shifted to focus on harmony in nature and the environment. The earth tone color palette brought us our most iconic 70s appliances, furnishings and fabrics: “Beige, rust, avocado, harvest gold, mustard yellow, earthy brown played together in patterns and solids.” (Source: Sherwin Williams) As a child of the 70s, I have to say it was not the best decade for décor. I’m not sure I enjoyed these colors on the sofa, in the kitchen or on me. I do remember feeling close to nature as a child, so I must have enjoyed some of that harmony though. A little bit of the 70s décor is reappearing these days. Gold is back in, as well as orange and brown.

In the 1980s, America developed more conservative ideals. Hippie, groovy, earthy colors transitioned to successful looking, preppy styles with neon colors and bright pastels. Americans began to value consumerism, materialism and brand names. If the preppy colors didn’t work for you, there were also softer, Victorian colors. Décor became a dichotomy of bold, geometric shapes and feminine, floral, traditional style. The 1980s mauves were almost as bad as the big bangs. Again, a decade to improve upon, in my opinion. There’s no changing school photos with big bangs, but we can at least get rid of the mauve decor. While the 80s were fast paced, the 1990s seemed more laidback. There was huge prosperity and more Americans were doing well. Almost everyone was working, there was little threat of war (at least on our soil) and a surplus in our federal budget. People became brave with money. They bought big houses, and felt warm and cozy with rich earth tones of reds, golds, beiges and browns. Tuscan style décor with rich colors, textures and iron scrolls became popular. Grunge and coffee house style with its warm, laidback décor was also a hit. Designing homes became a huge passion in America, especially with the launch of HGTV.

n the 2000s, Americans became more serious. Successful, busy lifestyles caused Americans to become more stressed out. While we still liked the richness of wood tones, we also gravitated to cooler, spa-like color schemes. Soft greens and blues in our bedrooms and baths helped set relaxing, vacation-like tones, invoking a sense of escape. This was also a prosperous decade until the Great Recession. In 2008, job stress changed to job losses and financial crises for many of us.

Décor and color concerns were put on hold for many recovering from the worst recession since the Great Depression. However, when we recovered, I think we felt more mature and sophisticated. And what better color palate reflects sophistication than gray, black and white? In the 2010s, “the graying of America begins in full force. Stainless steel appliances are the norm and we now opt for gray on our walls rather than beige. Whites, black and off-black become popular wall colors.” Cool greys and whites have taken the stage for most of this decade. White reduces visual clutter; lines are clean and uncomplicated. With all the technology and constant information, white at home helps us free our brains. Pure, simple decor helps give us uncomplicated living. I like to call it less is more décor. And now a look into the future, although predicting color is much harder than reflecting. According to our experts at Sherwin Williams, color trends for 2017 are Restless! Which makes sense, if you think about how we are feeling. America seemed united after 9/11 and after the recession, but lately we are becoming very divided again. The social issues from previous decades, although greatly improved, still show their wounds. And many feel divided by recent political trends. So it’s not surprising that the future of color trends is described not only as restless, but impatient, melancholy and purpose-driven.

I am a huge fan of the noir palette, with its promise of refuge and romance. I like the experience-focused, natural and altruistic holistic colors. The intrepid colors are representative of our impatience. Global citizenship and our role in the world has become much more important, thus the unbounded palette. My favorite description of unbounded is “We’re more likely to invest in the best we can afford — crafted and customized — and then keep it forever."- Sherwin Williams.com.

That’s a good way to describe our philosophy at Ashton Woods: Invest in your new home, craft and personalize it in our Studio, and keep it forever. No matter the color palette, we will make it look and feel like your best home ever.